We spent the 13th-15th at the Jinshan Hotel and departed on 16th. Each morning before breakfast involved a 5:30 a.m. start to explore various hotel grounds and a location called Lighthouse Point, checking for migrants. I must admit I had formed a mental image of Lighthouse Point as something resembling Portland Bill, so in that respect it was a bit of a disappointment! In fact it was just a small jutting out area with trees and scrub, which acted as a migrant ‘trap’. It produced one of only two sightings of Great Crested Grebe, Hobby, Japanese Quail coming in off the sea, Oriental Reed Warbler, Japanese Tit, and a few other species. The rest of the day would be spent visiting other main areas including the Sand Flats, and a coastal area north of the neighbouring city of Qinhuangdao [pronounced chinhwangdow] called Stone River, and we also had a visit to a section of the Great Wall. Rather than detail each early morning, here are the highlights from visits to the Friendship Hotel, the Dongshan Hotel, Jinshan Hotel, Lighthouse Point and a weedy field near the Jinshan: Japanese Sparrowhawk, Hobby, Amur Falcon, Oriental Turtle Dove, Spotted Dove, Eurasian Collared Dove, Common Cuckoo, Pacific Swift, Common Swift [pekinensis], Grey Nightjar, Hoopoe, Grey-headed Woodpecker, Bluethroat, Siberian Rubythroat, Red-throated Thrush [an imm bird], Thick-billed Warbler, Eastern Crowned Warbler, Pallas’s Warbler, Yellow-browed Warbler, Two-barred Warbler, Radde’s Warbler, Dusky Warbler, Songar Tit, and Hair-crested Drongo. Kevin & I were lucky enough to have a brief view of a White’s Thrush and also Siberian Thrush, whilst exploring behind one of the buildings at Dongshan. I should say at this point that it was during one of our early morning forays into hotel grounds [it was probably the second day], that Bill unfortunately badly sprained his ankle when stepping down off a low banking via a rock which wasn’t very stable. His ankle swelled up very badly and the poor guy was in a lot of pain. Kevin eventually came to the rescue and purchased a walking pole whilst we were lunching in Qinhuangdao, which helped to an extent, and then the following day appeared with a wheelchair! Hence poor Bill was wheeled around in that whenever possible, or rather should I say that poor Kevin pushed Bill around – some of the slopes were a little steep! Fortunately with Ibuprofen gel and pain killers, Bill was able to carry on and the thankfully the swelling did start to subside.

﻿The main sites by day﻿ 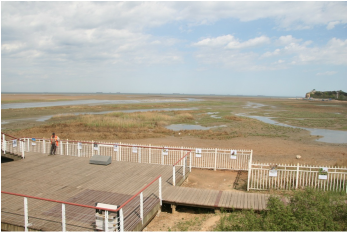 The Sand Flats
13th May
Sand Flats  - we had a wader fest here and many other birds – the area was literally heaving with birds. All the Egrets seen already were present, plus a new bird in the form of a Chinese Egret. Waders not already seen comprised 4 Avocet, Kentish Plover, 3 Temminck’s Stint, and Black-tailed Godwit [eastern subsp]. Amongst those already logged, there were around 20 Red-necked Stint, 50 Wood Sandpiper, and good numbers of Sharp-tailed Sandpiper and Long-toed Stint. Overall there were over 20 species of wader present. Another excellent target bird was a Relict Gull, out amongst the Black-headed Gulls and Black-tailed Gulls, and sadly far too distant to photograph or video. New terns for the list comprised 4 Gull-billed and 4 Whiskered. 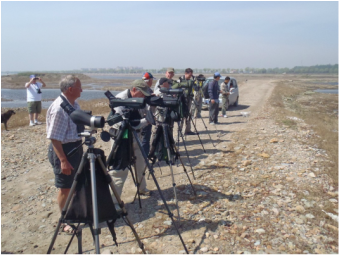 The group at Stone River
Stone River – this was an interesting and very large area just north of the city of Qinhuangdao, comprising a river with rocky islands, many reedy and marshy pools created by sand or gravel extraction, dunes, conifer plantations and scrub, and a beach. On arrival here the first bird was a new addition to the wader list in the form of a Grey-tailed Tattler, a good bird to get, and at the same time 4 Grey-headed Lapwing were seen flying over. A few Grey Plover were also a new addition. More or less all the other waders already listed, were present too. In addition, a large Snipe sp was found by the other Birdfinders group who were visiting the same day [they were on a tour that started a day before us]. This was ultimately photographed by one of that group and its ID remains unsolved as I write – it was suspected at the time to be one of the larger snipes – Swinhoe’s or Solitary. It was seen in flight by all as it flushed. A Grey Nightjar was flushed in one of the conifer plantations and most people had views of a Dollarbird. Many of the pools had areas of reed, which had singing Oriental Reed Warblers, and eventually Black-browed Reed Warblers gave good views. Our first Eastern Crowned Warbler was in fact here, as was Hume’s Leaf Warbler and many flycatchers. A couple of Chinese Penduline Tits were called by our leader Bill, and seen briefly in flight. A good number of  Pallas’s Reed Buntings were around the pools, characterised by their overall grey plumage tones.
The Great Wall at Jiaoshan – we spent the remainder of the day driving to this part of the Great Wall, NW of Qinhuangdao and visiting the site. What an awesome spectacle, with the huge wall stretching away up the steep hillside to a watchtower above. In addition to the wall there was an important species to be found here – Pere David’s Laughingthrush [rather boringly also know as Plain Laughingthrush]. A quiet walk in the gardens at the bottom of the wall soon had us watching a bird behaving like most Laughingthrushes, skulking around on the ground in amongst the leaf litter and undergrowth.  We also had good views of Amur Falcon here, and Large-billed Crow, and a species of squirrel. Four of us, plus Kevin and Anna, managed to make it all the way up to the watch tower. It was a very strenuous climb, negotiating steep sloped sections, then sections of steps which were uneven in height and staggered from side to side – a deliberate design intended to make it difficult for any invading army to negotiate at speed. I was pretty much staggering from side to side when I reached the top, but it was well worth it for the view down. The 6 of us then made our way down and at the bottom, as we walked towards the others waiting by the main gate, I was alerted by someone loudly calling my name. I soon found the source – Gareth Jenkins had somehow managed to get locked in the loos!! It was around 5 p.m. and closing time and an official had put a padlock and chain on the doors, which although they could be opened slightly, the gap was not big enough for poor Gareth to squeeze through with his optics. Having passed them to one of the group he did manage to squeeze through eventually! We then drove back to Beidaihe for a well-earned evening meal. All our meals at the Jinshan were excellent.
Click on each image below for a full size version with caption. 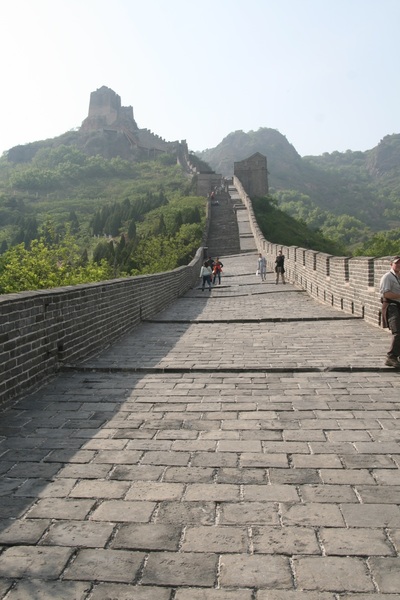 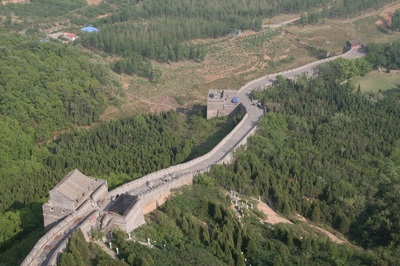 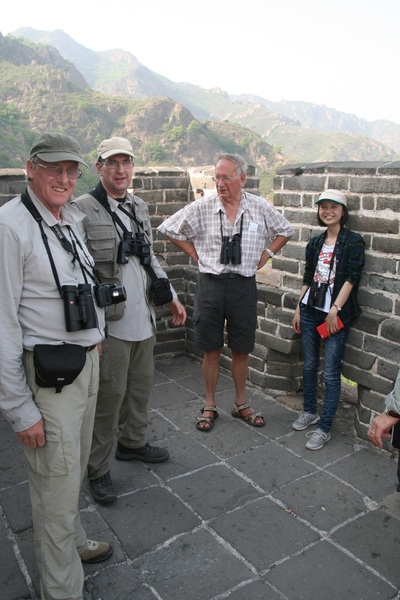 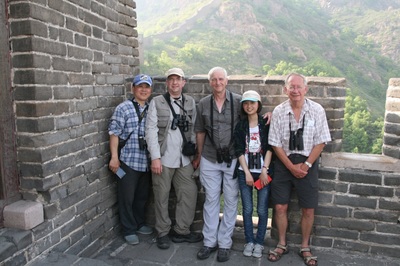 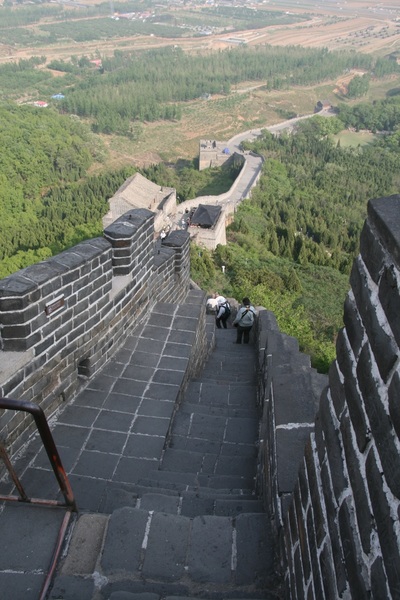 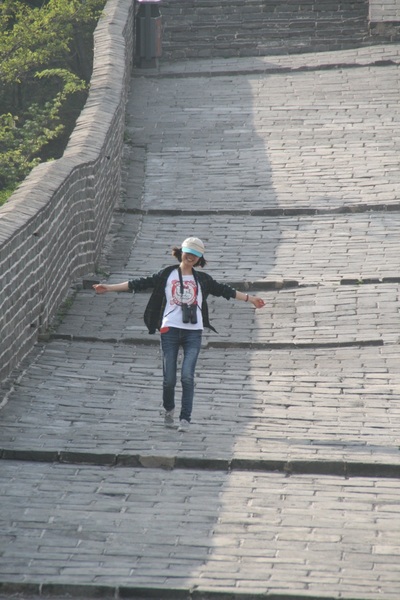 14th May - ﻿ Today we visited Lighthouse Point, the Friendship Hotel grounds, Dongshan Hotel grounds, Jinshan Hotel grounds, and also had another excursion to the Sand Flats. However this time at the latter we decided to access the viewing area via the boardwalk rather than stand on the busy road bridge. This afforded a slightly closer view and also took us past some areas not viewable from the road. The first new bird was a Brown-cheeked Rail [a split from Water Rail], which showed well by the boardwalk. Also in the same area were 3 Vinous-throated Parrotbills, which showed well, and a Black Drongo was noted in a treetop together with a Black-naped Oriole, many of which were seen subsequently elsewhere. All the usual waders were present, with Greenshank now numbering 40, and we added Turnstone to the list, and 2 Terek Sandpipers were noted. On the Gull front we added Mongolian Gull [considered by some to be a ssp of Vega Gull] but a separate species in the field guide, and also Heuglin’s Gull, 4 Gull-billed Terns and 8 Whiskered Terns. Simillima Eastern Yellow Wagtails were also present together with White Wagtails of both ocularis [Siberian] and leucopsis [Amur] subspecies.
Pix below of further views of the Sand Flats and typical hotel grounds - click on each one. 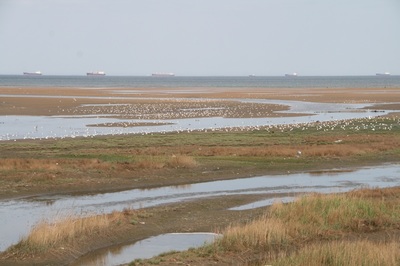 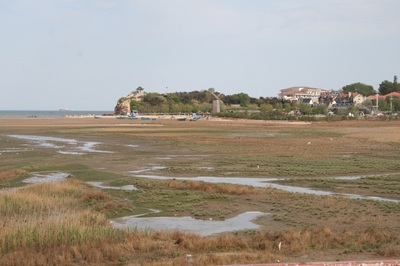 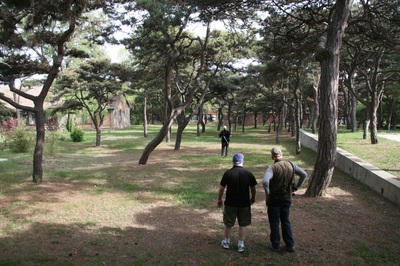 15th May - today we visited the Friendship Hotel grounds again before breakfast, then Stone River, and we called in at the Sand Flats on the way home. New birds included 8 Dunlin of the sakhalina subspecies, on the beach at Stone River, and a larger Snipe was flushed there, possibly Pin-tailed. The Sand Flats had 2 Green Sandpiper added to its extensive wader list. Whilst at the Stone River we had good views of a Rufous-tailed Robin [aka Swinhoe’s Robin], a couple of Blyth’s Pipits, Daurian Redstart, Siberian Thrush, Thick-billed Warbler, and our first Black-faced Bunting. The star of the day though, came at our homeward stop at the Sand Flats when Alan & Bill found the much wanted Saunder’s Gull out with the Black-headed Gulls. This is a small gull, reminiscent of Little Gull but with a very distinct wing pattern and in summer plumage, as this one was, a black hood with bright white ‘lozenges’ above & below the eye, rather like Franklin’s Gull. Indeed it recalls Franklin’s except the mantle is pale grey. A great end to another great day.
Below some more views of the habitat at Stone River - clickable photos. 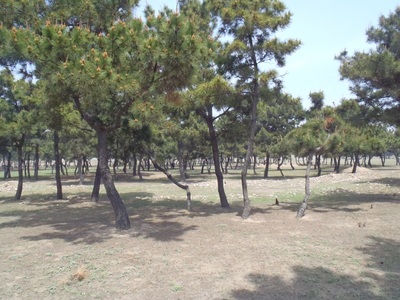 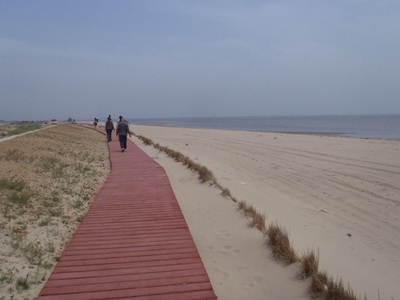 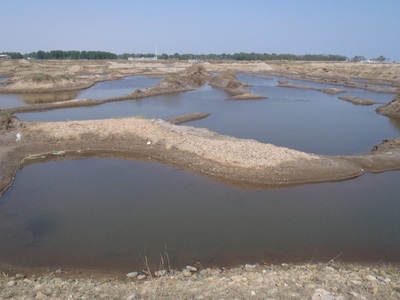 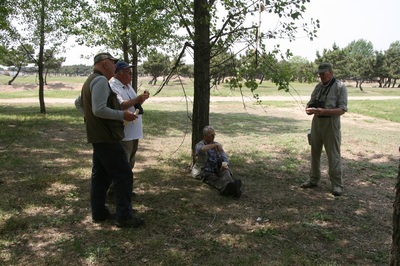 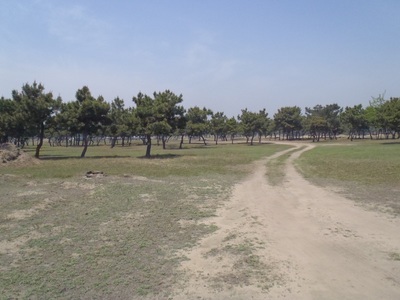 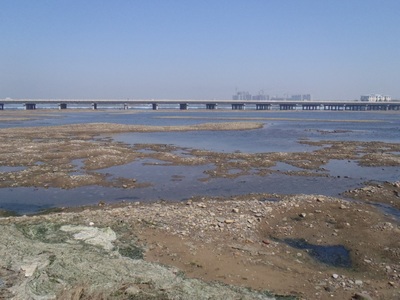